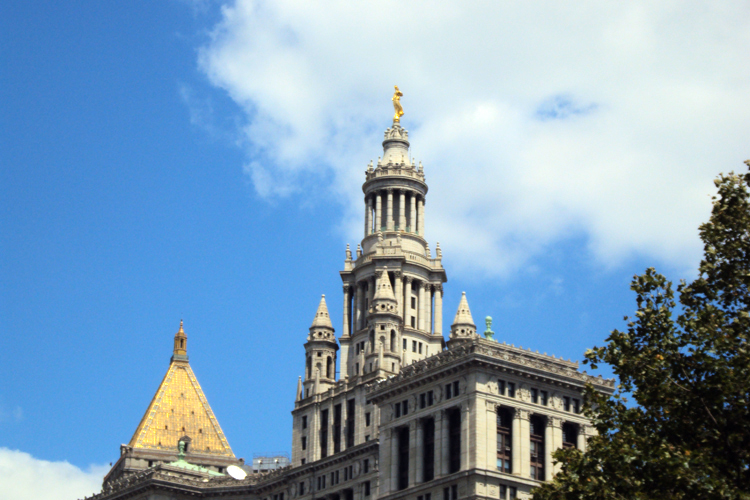 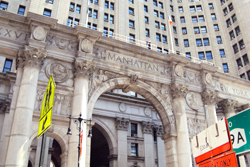 During the late 1800s, the City had outgrown its limited office space in City Hall. In 1907, an architectural competition for the design of the Municipal Building was held. The winning submission was provided by architect William M. Kendall of the firm McKim, Mead & White. The design was based on the Royal Liver Building in Liverpool, England. At the time, McKim, Mead & White was the largest architecture firm in the world. Construction began in 1909 and was completed in 1914. Today, over 1,000 people visit the various agencies in the building daily.

The City of New York was rapidly expanding during the end of the nineteenth century and as a result there was a growing number of government agencies, which required additional office space. By 1884, the City had outgrown its limited space in City Hall and had expanded into rental offices in privately owned buildings north of Wall Street. In 1884, Mayor Franklin Edson stated in his second annual report to the Board of Alderman that City Hall was becoming too crowded and that its "style of architecture was such that without marring its present symmetry, it couldn't be enlarged to the required extent."

The office space issue continued and there was a growing emphasis put on decreasing rents paid to landlords by the City. In 1888, Mayor Abraham Hewitt established a commission to locate a site and obtain architectural plans. A year later in 1898, the five boroughs were consolidated into Greater New York, which further increased the need for a suitable headquarters for the city government.

The final of four architectural competitions that were commissioned between 1888 and 1907 was for a design of the Municipal Building. The building was supposed to be a large office building to consolidate various agencies. The competition was commissioned by the Commissioner of Bridges, whose agency had acquired part of the designated land for a new terminal for trolleys that ran across the Brooklyn Bridge. Twelve firms submitted plans for a new building. Architect William M. Kendall of the firm McKim, Mead & White, designed the winning submission. The design was of a classically designed skyscraper based on the Royal Liver Building in Liverpool, England.

By 1909, construction on the Municipal Building had begun. The U-shaped structure was built on an irregular site adjacent to the Brooklyn Bridge. When the building was completed around 1914, it was one of the largest government office buildings in the world. The majority of the offices were full and open to the public. The total cost of the project was $9 million.

The Municipal Building is located at the intersection of Chambers and Centre Streets, just east of City Hall. The building has nearly 1 million square feet of office space and houses over 2,000 employees.

Over 1,000 people visit the building each day to use the various services and agencies. Thirty-three elevators service twenty-five stories within the main building and fifteen additional stories in the central tower. The Municipal Building was the first building in New York to have a subway station incorporated into the base of the building. The building was famously home to the Office of the Clerk where 30,000 New Yorkers were married every year for many years. However, in 2009 the City Clerk’s Office moved to 141 Worth Street.

The Municipal Building was designated a landmark by the New York City Landmarks Preservation Commission in 1966. The landmark building underwent renovations in 1993 and 1999. During the 1999 restoration, the exterior masonry was completely restored.

The design of the Municipal Building incorporated elements from Roman Imperial, Italian Renaissance and French Renaissance architecture. The building has a tripartite or three-section façade, which creates a U-shaped. Over the middle section there is a crown that is comprised of three tiered towers stacked on top of another and surrounded by four small towers. The central tower has a heroic figure, sculpted by Adolph Weiner, poised on top of a large copper ball. The statue is called “Civil Fame”. The base of the building is comprised of a series of columns, which enclose a plaza. The central arch above the plaza was inspired by the Arch of Constantine in Rome. There are sculptures above the plaza representing the civic virtues: Progress, Civic Duty, Guidance and Executive Power, Civic Pride and Prudence.