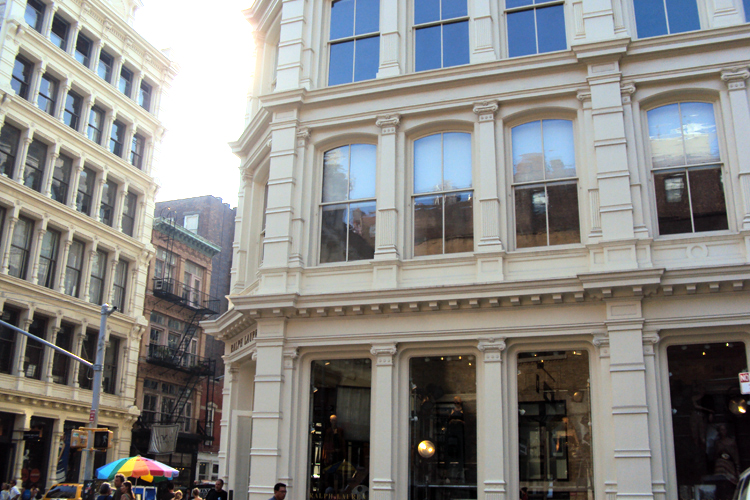 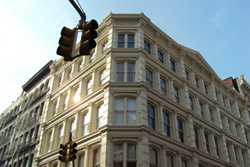 A promising young architect named Jarvis Morgan Slade, who sadly died unexpectedly at the age of 30 before the building was completed, designed 109 Prince Street in 1882 for C.H. Woodbury. The building was designed in a French Renaissance style. , “Architectural Iron Works, Cheney and Hewlett, New York”, the name of the foundry that cast the iron, is inscribed on a plaque facing Greene Street. The building was restored in 1993 and awarded the landmark Certificate of Merit by the New York City Landmarks Preservation Commission in 1994.

109 Prince Street is considered to be one of the most striking examples of 19th century cast-iron architecture in the world. The building was designed in 1882 by young architect Jarvis Morgan Slade. Slade had one of the most promising architectural careers in New York City before his unexpected death at the age of 30. He received his professional training in the office of Edward H. Kendall. Kendal had been trained at the Ecole des Beaux-Arts in Paris and is therefore presumably responsible for training Slade in French architectural style. Slade started his own practice in 1873 and was known for designing some of the most elegant commercial structures in Soho including 45 Greene Street and 147 Wooster Street. 109 Prince Street was his last commission and arguable his finest work. It was with this structure that he achieved a true sense of elegance in translating French Renaissance modes into the cast-iron medium. Slade designed the corner lot in the French Renaissance style for C.H. Woodbury. Sadly, Slade died before the building was completed. The foundry that cast the iron was Cheney-Hewlett Architectural Iron Works.

The building was completely restored in 1993. It was awarded the landmark Certificate of Merit by the New York City Landmarks Preservation Commission in 1994, signed by mayor Rudolph Giuliani. The building was painted a beige color in 2011. Ralph Lauren clothing store is the current tenant of the storefront.

Construction on 109 Prince Street commenced on October 1st, 1882 and was completed in January 31st, 1883. The five-story structure is five bay windows wide on Prince Street and ten wide on Greene Street. A distinguished chamfered corner entrance connects the Spring Street and Greene Street facades. A bold cornice divides each floor and amplifies the horizontality of the structure. The name of the iron foundry, “Architectural Iron Works, Cheney and Hewlett, New York” is inscribed on a plaque on the first pilaster of the Greene Street façade.