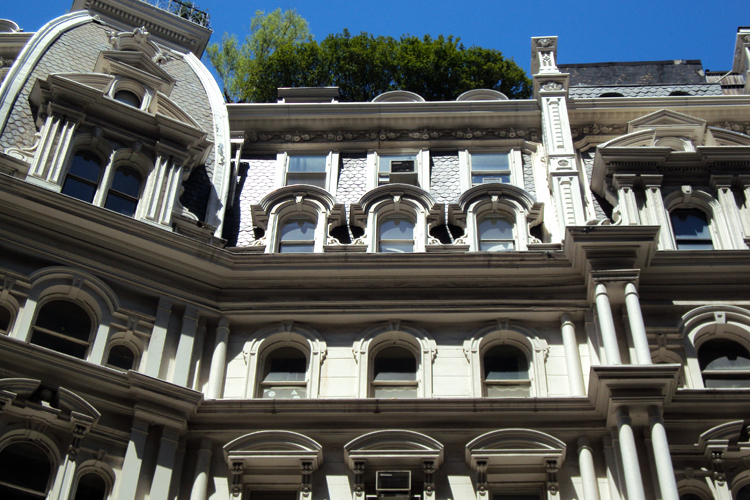 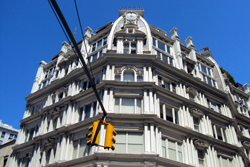 After the Civil War, the area by Madison Square Park emerged as a theater district. As a result, numerous hotels sprung up including the Gilsey House. In 1869 Peter Gilsey hired architect Steven D. Hatch to design the 300-room hotel. Gilsey was a Danish immigrant who became wealthy as a merchant. When the Gilsey Hotel opened in 1872, it was an instant success and attracted many notable customers including Samuel Clemens. After the theater district moved to Times Square the hotel lost favor. The hotel was eventually converted to a residential co-op.

New York City was in a state of transition after the Civil War. The leading department stores moved uptown to Ladies’ Mile between Sixth Avenue and Broadway from 14th to 23rd Streets. Numerous music publishers moved to West 28th Street. And the area began to emerge as an important theater district. Several fashionable hotels, including the Gilsey House (now called the New Breslin), opened along Fifth Avenue and Broadway near Madison Square Park. Prior to the war, almost all restaurants, hotels, theaters, and stores of any kind were located south of Houston Street. Along with the Gilsey House, there was the Grand Hotel at 31st Street, the Hotel Martinique at 32nd Street, the Coleman House between 27th and 28th Streets, and the Sturtevant at 1186 Broadway. Only the Gilsey House, the Grand Hotel, and the Coleman House remain.

In 1868, Peter Gilsey purchased the last remaining homestead in midtown from Casper Samlar for his hotel. Gilsey was a Danish immigrant who became wealthy as a merchant and later went on to invest in numerous properties in the middle of Broadway. The Gilsey House was built on what was the field of the St. George Cricket Club, which was later moved to Staten Island. Architectural Ironworks supplied the cast-iron for the hotel.

Peter Gilsey hired architect Steven D. Hatch and iron founder Daniel D. Badger to design the eight-story, 300-room hotel. Hatch had worked for several years for John B. Snook, one of the city’s top architects. The hotel was erected between 1869 and 1871. The Gilsey House was designed in Second Empire fashion, which was inspired by the architectural trends that had swept through Paris a decade prior.

When the Gilsey House opened in 1872, it was an instant success. Many notables stayed at the hotel, including author Samuel Clemens (also known as Mark Twain), well-known New York businessman Diamond Jim Brady, and Irish writer and poet Oscar Widle. The hotel also attracted coal magnates, railroad operators, and congressmen alike. The Gilsey House became a world-wide destination where writers and artist such as Clemens could mingle with and gain inspiration from colorful figures like Diamond Jim, known as for being the first New Yorker to own an automobile. Diamond Jim was the classic example of a Gilded Age businessman, a term coined by Clemens. It is said that the Gilsey House was the first hotel in New York City to offer telephone service to its guest.

The Gilsey Hotel remained a distinguished property for about three decades until the theater district moved north to Times Square at the turn of the century. The neighborhood became part of the garment district center. The hotel was converted to loft space in 1911. It is likely that some of the ornamental detail was removed from the façade during that time. Modernization of the storefronts was completed in 1946. By 1977, the Gilsey House was in deepening decay and successful restoration efforts seemed unlikely. However, in 1980 developers Richard Berry and F. Anthony Zunino took on the project and converted the hotel to a residential co-op.

The Gilsey House was declared an official city landmark September 11th, 1979. Numerous repairs have been made since to the former Hotel, which now houses 40 apartments, an elevator, basement storage, and laundry facilities. More recently, the Gilsey House was repainted in its original gleaming white. Numerous retail stores including New York Sunglasses and BusyBee Jewelry currently occupy the storefronts.

The Gilsey House is a classic example of American Second Empire architecture. The cast-iron, former hotel rises five-stories high with a distinguished chamfered corner entrance. A uniquely designed mansard with elegantly designed dormers and detailed orientation adds three-stories to the building. At the corner, a clock rests atop the arms of two mermaid figures. Each of the floors was designed with elaborate detail. Projecting paired columns separate the bays from side to side while each floor is clearly defined by cornices and separate window treatments. The original hotel rooms were decorated with rosewood and walnut, marble fireplaces, tapestries and bronze chandeliers.