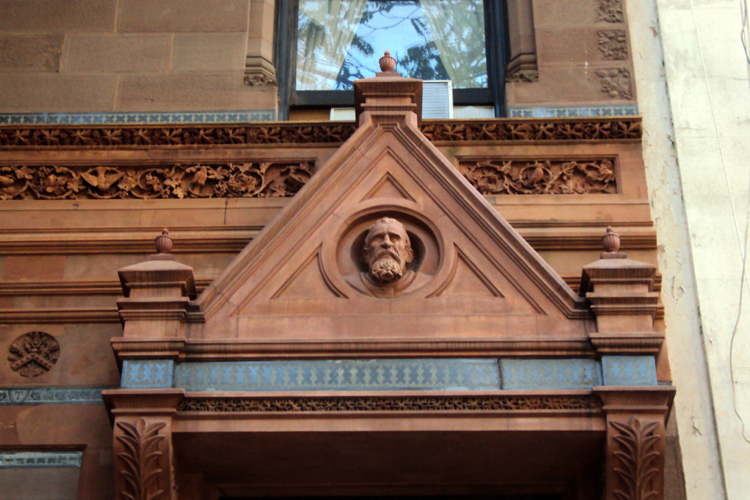 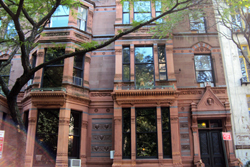 15 Gramercy Park South was originally built in 1844. However, the building looks vastly different today then it did then. New York Governor (1875-6) Samuel Tilden purchased the building along with the lot behind the building in 1863. In 1874, he also purchased the residence next-door and hired architect Calvert Vaux, one of the designers of Central Park, to convert the buildings into a single residence. Lavish details including Gothic ornamentation and stained glass ceilings were added. The National Arts Club (founded in 1893) purchase the building in 1906 as it’s new home.

The historic mansion located at 15 Gramercy Park was originally built in 1844. New York Governor (1875-6) Samuel Tilden fancied the mansion’s warm brown facades and purchased the building in 1863 for $37,500. Tilden also purchased the lot behind the building on 19th Street and eleven years later he purchased the residence next door. In the 1870’s he converted the two buildings into a single residents and had them completely renovated. Sparing no expense, Tilden hired famed architect Calvert Vaux, who was one of the designers of Central Park, to complete the renovations and “victorianize” the building’s faced with sandstone, bay windows, and Gothic ornamentation. Well-know artist John LaFarge created stunning stained glass ceilings for the interior of the mansion. Amongst LaFarge’s other stained glass masterpieces included the windows at St. Paul’s Chapel, Columbia University and those at the Trinity Church in Boston. Italian wood carvers produced the fireplaces. Craftsman Donald MacDonald, also known for creating the two windows in Harvard’s Memorial Hall, shaped a unique stained glass dome for the building. The flat front, iron-grilled building on the west side of Gramercy Park, is similar to how 15 Gramercy looked prior to the renovations.

Tilden was an eminent lawyer and reformer and at about the time the remodeling of his home was being completed, he was the Democratic Party's nominee for president. He won the popular vote but lost the election in the Electoral College by one vote, therefore, loosing the presidency by a hair.

By the late nineteenth century, Union Square had become the heart of New York’s entertainment and shopping districts. New office buildings attracted publishers, artists, photographers, and architects for their offices and studios. Important institutes were also attracted to the area, one of which was the National Arts Club.

The National Arts Club has a tradition of exclusivity through inclusivity. Female artist have always been considered and admitted equally by the club. Keeping with that tradition of inclusivity, the club also welcomes minorities. In addition to creating opportunities for artists to connect, the club fosters educational programs and scholarship awards. The National Arts Club’s Membership list has been the who’s who list in American art, architecture and cinema over the past century and has even included three U.S. Presidents (Theodore Roosevelt, Woodrow Wilson and Dwight D. Eisenhower). The dramatic arts are represented today by such notables as Martin Scorcese, Ethan Hawke, and Uma Thurman.

Restorations were made to the MacDonald dome in the 1970’s by stained glass artist and club member, Albinus Elskus. The Tilden Mansion was designated a New York City Landmark in the 1960’s and a National Historic Landmark in 1976.

The one time adjacent row houses have been remodeled into a single High Victorian Gothic style mansion. The complex, asymmetrical façade has multicolor and botanical ornamentation. Sculptures of Shakespeare, Milton, Franklin, Dante and Goethe project from the warm reddish brown façade. The historical details were intended to allude to Tilden’s library when constructed.