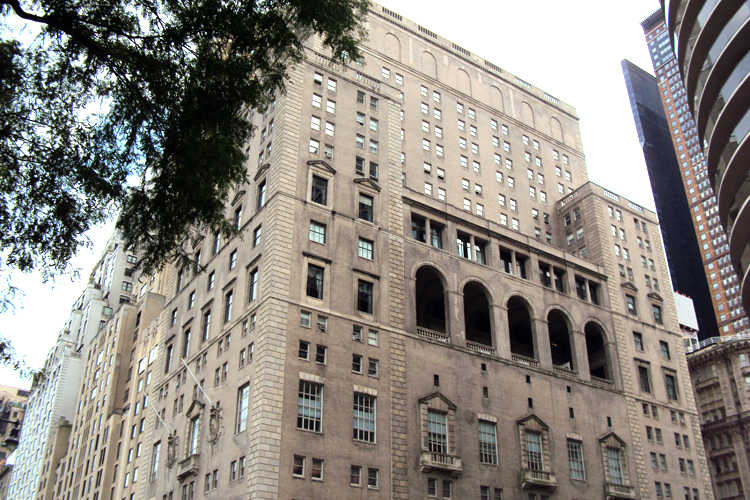 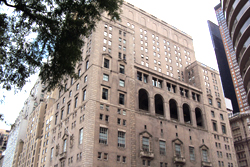 During the late 1800s as numerous social clubs themed around business and the arts were established in New York City so was the New York Athletic Club. In 1868, the club was founded by accomplished athletes: Henry Buermeyer, John Babcock, and William Curtis. The New York Athletic Club moved into its current home at 180 Central Park South in 1930. The Italian Renaissance style club was designed by the architecture firm of York & Sawyer, known for also designing the Federal Reserve Bank of New York. The club currently has the largest facilities in Manhattan.

By the 1920’s, prime location land lots throughout Manhattan were dwindling. The New York Athletic Club was actually built on the site formerly occupied by the Central Park Apartments, also called the Navarro or Spanish Flats. In 1884, plans were well underway to develop the Central Park Apartments as the largest apartment building in the world. However, due to some miscalculations by builder Philip G. Hubert, the bank foreclosed on the mortgage before the building could be completed and finished the project as a complex of rental buildings.

During the late 1800s numerous social clubs themed around business and the arts had been established in New York City. However, a club for athletes was a new concept. In 1868, the New York Athletic Club was founded by accomplished athletes: Henry Buermeyer, John Babcock, and William Curtis. The trio shared a common interest in the growth and development of amateur sports in the United States. On September 9th 1868, the trio along with 11 other sportsmen gathered at the Knickerbocker Cottage tavern in Manhattan for the first meeting of the New York Athletic Club. Over the past 140 years, the New York Athletic Club has experienced unprecedented success. Countless Olympic medalists have been New York Athletic Club members. The club and its members have been pioneers in the sporting world. Competitive fencing, squash courts, running tracks constructed of cinders, and bicycle racing were introduced to the United States by members of the NYAC.

Upon its inception, the New York Athletic Club had been based out of 50 Central Park West, which has since been demolished and rebuilt as the St. Moritz Hotel (today owned by the Ritz Carlton Hotel Group). The New York Athletic Club moved into its current home at 180 Central Park South in 1930. The massive Italian Renaissance style club was designed by the architecture firm of York & Sawyer. Both partners of the firm, Edward York (1863–1928) and Philip Sawyer (1868–1949), were trained by the famous architecture firm McKim, Mead and White, which lays claim to an impressive number of the city’s landmarks. In 1898, they established their own independent firm. York & Sawyer were known for designing the Federal Reserve Bank of New York located at 33 Liberty Street.

The twenty-one-story structure, which is home to the New York Athletic Club has 300 bedrooms, a swimming pool, a large billiards room overlooking the park, two handball courts, a gymnasium, and many other superb facilitates. The New York Athletic Club is a handsome component of Central Park South with membership numbers in the thousands. The club has the largest facilities in Manhattan.

The facade of the massive Italian Renaissance palazzo style building is not particular elaborate. The building is constructed of limestone and stucco on a steel frame. There is what is architecturally referred to as a stubby tower where two open and two closed handball courts were located. There is an open corridor or loggia on the eleventh floor where the dining room is located. There is also a sensational roof deck on the twenty-fourth floor.