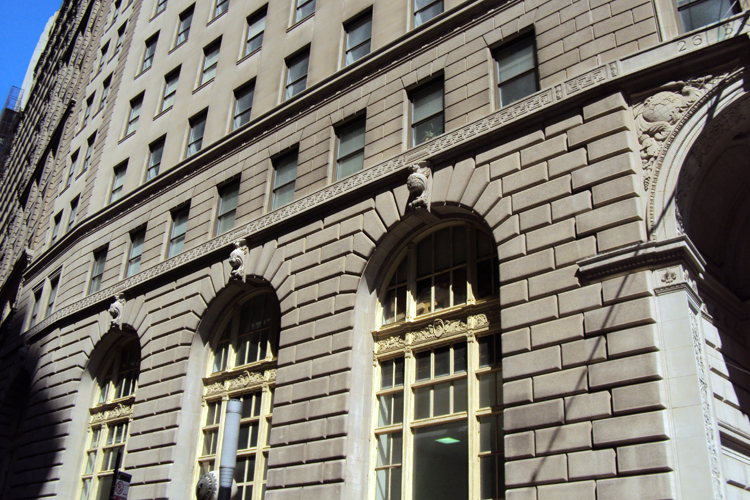 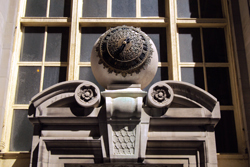 26 Broadway was originally built as the headquarters for the Standard Oil Company in 1884-85 and enlarged in 1895. By the 1920s if became trendy for corporate giants to amass giant structures in lower Manhattan bearing the name or logo of the corporation. Founded in 1870 by John D. Rockefeller, Standard Oil Company erected a large, more suitable structure, incorporating much of the original building, in 1921 and 1926 and finally completed in 1928. The architectural firm of Carrère & Hastings, noted for designing the Public Library, were awarded the commission.

By the roaring 1920’s early skyscrapers had sprung up throughout lower Manhattan. Buildings were being built taller and taller. Many of the structures that had been erected during the late nineteenth century were being replaced with larger structures. It became trendy for corporations to own a large building in lower Manhattan bearing the name or logo of the corporation.

During this time period, the Standard Oil Company followed suit with many of the corporations in lower Manhattan by expanding their original headquarters at 26 Broadway. John D. Rockefeller founded the firm in 1870 in Cleveland then relocated the company to New York City after consolidating a controlling position in oil refining and marketing through the Standard Oil Trust. At that time, the management of many oil companies was united. The original headquarters building was built in 1884-85 and enlarged in 1895. The new building was erected 1921 and 1926 and finally completed in 1928. The new building incorporated much of the original building.

From the Standard Oil Company’s headquarters at 26 Broadway, John D. Rockefeller and his associates monopolized the American oil industry, regulated the production of petroleum, set prices for petroleum products in the American market, endured a sensational anti-trust decision in 1911, and maintained a dominant role in the international oil business.

An all-star team of architects consisting of Thomas Hastings of the architectural firm of Carrère & Hastings, and associates, Richard Shreve, William Lamb & Theodore Blake were awarded the commission for the new Standard Oil Building. The architects were considered to be some of the most respected tall building designers in New York City during the 1920s, each bring unique expertise to the project. Carrère & Hastings had gained wide acclaim for the design of the New York Public Library in 1897. Thomas Hastings was known as a pioneer in architecture and had developed unique solutions to the massing of tall buildings in response to the setback requirements of the New York City Building Zone Resolution adopted in 1916. Shreve and Lamb went on to design the Empire State Building in 1929-30.

The original structure was ten-stories and eighty-six-feet wide with a Renaissance Revival style granite façade designed by Ebenezer L. Roberts. The 1895 expansion included the addition of six additional stories and a twenty-five foot extension on the north side designed by Kimball & Thompson. A portion of the old red brick and granite construction is visible on New Street.

By expanding the existing building, rather then relocation, Standard Oil was able to occupy a highly visible location in Lower Manhattan, a sign of the dominance. Construction began in 1920.

Standard Oil experienced challenges acquiring and removing tenant from the four buildings that occupied the expansion site. Consequently, construction had to be completed in phase, which ultimately also affected the shape of the building.

Construction began on the northwest corner of Beaver and New Streets first in 1921. The Broadway façade, including the main entrance, was built next. In 1923, the Broadway and Beaver Street corner was completed followed by the replacement of the front wall of the old Standard Oil Building in 1924-25. Lastly, the central portion on Beaver Street was completed after the Child's restaurant lease expired in 1928.

The Standard Oil Building was one of the first buildings constructed in accordance with the Building Zone Resolution, which was adopted in 1916 and mandated setbacks on upper stories to control air and light. The building was admirer for its unique shape and silhouette. The building’s nine-story base follows the curve of Broadway while the 480-foot-high pyramidal tower is aligned with Manhattan's street grid uptown. The lantern atop the tower could be seen by ships entering New York harbor before the post-war building boom obstructed the view.

In 1954, Socony-Mobil (formerly Standard Oil of New York) erected a new headquarters at 150 E. 42nd Street and sold the 26 Broadway in 1956. However, the building at 26 Broadway has remained a prominent address in lower Manhattan and has been occupied by firms in the oil, pipeline, and drilling fields, as well as shipping and investment firms. The building has been rehabilitated with new mechanical systems.

The sixteen-story base and the thirteen-story tower are clad in Indiana limestone. The exterior features boldly carved elements, columns at the top of the base and upper tier of the tower. Lamps and torches are used to represent the oil business.

The Broadway façade is dominated by the central entrance, which is flanked by two-story arched window openings. Above the entrance hangs a wrought-iron light fixture incorporating the signs of the zodiac.

set back from the three street facades. All four sides are exposed; though, only the south and west sides are visible from nearby streets. Balustrade railings surround the various roof levels. The design is based loosely on the Mausoleum of Halicarnassus or Tomb of Mausolus in Turkey.