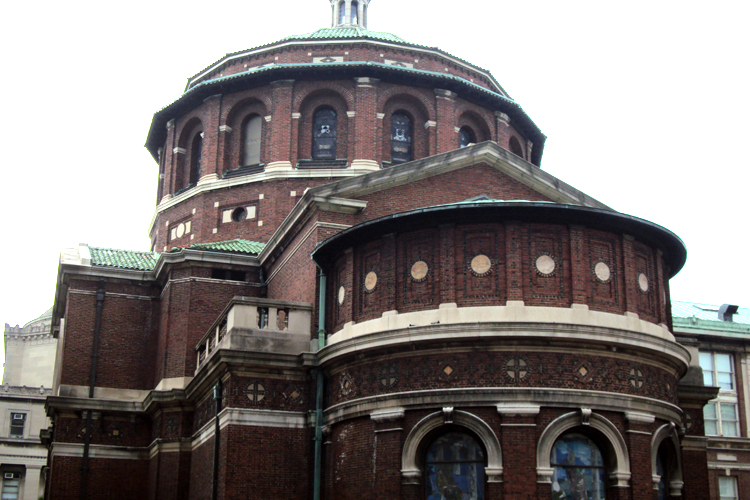 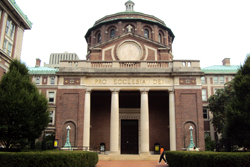 Funding was not initially available for the chapel included in the original plan for Columbia’s campus, which was prepared in 1894. However, in 1903 sisters Olivia Egleston Phelps Stokes and Caroline Phelps Stokes offered to finance the chapel with the condition that their nephew, I.N. Phelps Strokes, design the building. Construction began in 1904 and was completed in 1907. Stokes had studied at Columbia and at the Ecole des Beaux‑Arts in Paris. In 1966, St. Paul’s Chapel was one of the first buildings to be designated a landmark in New York City.

Columbia University was established in 1754 as King’s College under a charter from King George II of England. The University, which was established as an Anglican institution, is the oldest in the State of New York and the fifth oldest in the United States. Classes were initially held at the Trinity Church schoolhouse located on Broadway and Wall Street. The institution was moved to lower Manhattan, near the Hudson River, in 1760 where it remained for nearly a century. In 1857, the institution moved yet again to a building located at Park Avenue and 47th Street. Finally in 1892, Columbia’s trustees acquired the land between Broadway and Amsterdam Avenue and West 116th and 120th Streets from New York Hospital’s Bloomingdale Asylum and set out to develop a proper campus for Columbia University.

Charles McKim of the prominent American architecture firm McKim, Mead and White prepared a master plan for Columbia in 1894. The plan centered around an imposing library and chapel. However, funding for the chapel was not initially available and the academic complex opened without it in October 1897. However, in 1903 sisters Olivia Egleston Phelps Stokes and Caroline Phelps Stokes offered to finance the chapel as a tribute to their parents. The one condition was that their nephew, I.N. Phelps Strokes, design the building. Construction on the chapel began in 1904 and was completed in 1907. St. Paul's Chapel was the first building on campus not designed by McKim, Mead and White.

Isaac Newton Phelps Stokes had studied architecture at Columbia University and at the Ecole des Beaux‑Arts in Paris. He worked at the architectural firm of Howells & Stokes, where he was a partner. St. Paul’s Chapel was one of the earliest buildings designed by I. N. Phelps Stokes. He went on to have a impressive career designing institutional, residential, and commercial buildings throughout the country. However, he always considered St. Paul’s Chapel to be his masterpiece, so much so that he and his wife had their ashes laid inside after their deaths.

St. Paul’s Chapel also has some of the most intricately designed glasswork in all of New York City. The three stained glass chancel windows showcase a scene of St. Paul preaching to the Athenians on Mars Hill. The rich deep colors that were used by glass artist John La Farge were intended to harmonize with the chapel’s brick and tile. Glass artist Maitland Armstrong designed the 16 windows in the dome, displaying family coats of arms in honor of important Columbia graduates including DeWitt Clinton, William Rhinelander and Philip Van Cortlandt.

Over the years, various additions have been a gifted to the chapel. In 1918, the class of 1893 donated the bronze bell, which still today calls the University community to many of its most significant gatherings. The bell was cast by Meneely and Company of Troy, New York. The transept windows depicting great teachers of the Old Testament to the north and the New Testament to the south were designed by Henry Wynd Young, Jr. and J. Gordon Guthrie and installed in the 1920s. The chapel also has one of the finest organs in New York. The 94 rank Edward M. Skinner instrument was donated in 1938, replacing the smaller original organ. More recently, the Nakashima Peace Altar was gifted to the chapel by Professor William Theodore deBary and his wife to commemorate Columbians who died in the service of their country. The altar way made by master wood maker George Nakashima, an advocate of peace and east-west rapprochement in religion and art.

In 1966, St. Paul’s Chapel was one of the first buildings to be designated a landmark by the New York City Landmarks Preservation Commission.

St. Paul's Chapel provides a venue for hundreds of religious and campus events each year. The chapel is open daily.

St. Paul’s Chapel is constructed of the same red brick and limestone as other campus buildings; however, it’s uniquely accented with yellow and white marble highlights. The green ceramic tile dome, which is pierced by 16 arched windows and crowned by a terra-cotta lantern, is the chapel’s most prominent feature.

Visitors enter the chapel through a columned porch (or portico), which is engraved with the Latin phrase Pro Ecclesia Dei (For the Church of God). Each column capital is decorated with a cherub's head designed by Gutzon Borglum, the sculptor who later carved Mount Rushmore. The entrance is ornamented with grave vines with Columbia’s motto, In Lumine Tuo Videbimus Lumen (In Thy Light Shall We See Light), carved above the doorway.

Inside the chapel, the floor plan stretched 120 feet and the central dome rises 91 feet. No plaster or paint was used. The beauty of the structural materials was designed to be paramount. The marble flooring was laid in intricate patterns resembling those in the early Christian churches of Italy.