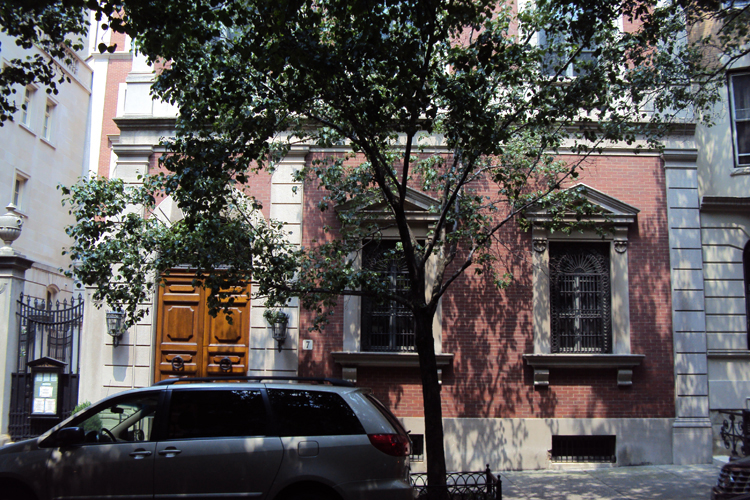 House of the Redeemer 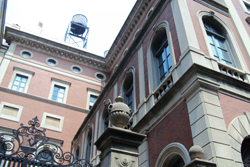 The former mansion of Ernesto G. Fabbri and his wife Edith Shepard Fabbri, which today is known as the House of Redeemer, was built between 1914 and 1916. Ernesto was an Italian count and associate of J. Pierpont Morgan while his wife Edith was a great-granddaughter of Cornelius Vanderbilt. Architect Grosvenor Atterbury, who was noted for his work on City Hall, designed the building. The historic library was imported from Ducal Palace in Italy. Edith deeded the house to the Episcopal Church in 1949 and it become known as “The House of Redeemer”.

The Italian Renaissance style mansion, which is today known as the House of the Redeemer, was built between 1914 and 1916 as the town residence of Ernesto G. Fabbri and his wife Edith Shepard Fabbri. Ernesto was an Italian count and associate of J. Pierpont Morgan while his wife Edith was a great-granddaughter of Commodore Cornelius Vanderbilt. At the time, the block was developing as a side street mansion enclave with number of other mansions being built, which must have been alluring for the couple.

The mansion was designed by architect and town planner Grosvenor Atterbury. Atterbury had studied at the L’Ecole des Beaux Arts in Paris and was noted for the 1908 restoration of New York City’s City Hall. The interior was designed by Ernesto’s brother Egisto Fabbri. Egisto had worked in Paris for several decades and was well versed in the historic aspects of Italian architecture. He worked to include Edith Fabbri’s collection of Italian Renaissance and Baroque furnishings into his design.

One of the most splendid highlights of the House of Redeemer is its historic library. The library was originally built in the 1400’s for the Ducal Palace in Urbino, Italy. The original wood ceiling and paneling was transported on two ships from Italy, through waters infested with German submarines (or U-boats), which were used to block commerce during WWI. The Duke was a patron of the celebrated Italian renaissance patron Raphael, who is said to have painted the coat of arms on the ceiling. The House of Redeemer was designed and constructed to contain the library. In addition to the exquisite paneling, the library has balustrade railings and a monumental fireplace. World famous Australian born violinist Fritz Kreisler performed at the Fabbri’s house warming party in 1916.

At the ripe age of 77, Edith was moved by a sermon delivered in 1949 by the Bishop of Pittsburg, Right Reverend Austin Pardue, on the importance of silence and prayer in ones spiritual life. As a result, she deeded the House to the Episcopal Church for use as a religious retreat under the name “The House of Redeemer”. The House was run from Episcopal nuns (the Sisters of St. Mary) from 1949 to 1980, then a residential warden was appointed. Today, the House of Redeemer is operated by a Board of Trustees. Although the House functions as a nondenominational retreat, it’s also a de facto house museum. Much of the original décor and furniture remains and is still in use. The original parlor is now a chapel and the library and dining rooms are used for lectures and concerts. The library contains an Aeolian Opus 1398 organ from 1916. Morning and evening prayer service is open to the public. The House of Redeemer was declared an official city landmark July 23rd, 1974.

The House of Redeemer was designed in Italian Renaissance style. The building is constructed primarily of brick with flat stone trim around the windows and corners giving the façade a rectangular character. The rooms with the oval windows on the top floor were the servants’ quarters. The mansion was designed in an L-Shape to accommodate the library in one wing while also producing a courtyard. The entrance to the mansion is through tall oak doors. Within the main entrance, marble steps lead to the second set of doors, which open into the entrance hall.