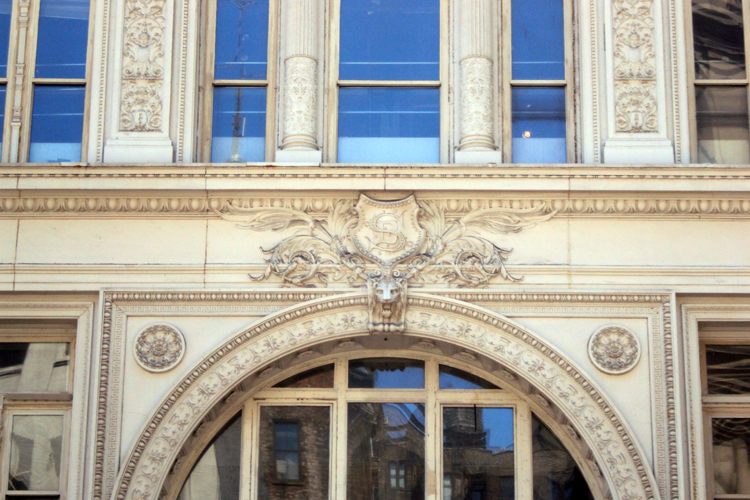 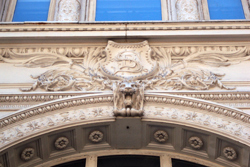 The Neo Renaissance style building located at 32-36 West 23rd Street was the 3rd home of the Stern Brothers Department Store. Stern Brothers was founded in 1867 by Isaac, Louis and Benjamin Stern. The brothers were sons of Jewish German immigrants so it only made sense that they hired architect Henry Fernbach, who was also Jewish German born immigrant, to design their new store in 1879. The building was enlarged in 1892 to the design of W.M. Schickel. The brothers moved their department store uptown to Fifth Avenue and West 42nd Street in 1913.

The Stern Brothers Department Store was a family run business founded by Isaac, Louis and Benjamin Stern in 1867. The brothers were the sons of German Jewish immigrants. Initially the brother sold dry goods from their store in Buffalo, New York. A year later in 1868, the brothers opened up a one-room store at 367 Sixth Avenue in New York City. As business grew they began selling both luxury goods and merchandise for the working classes. Stern Brothers was a family run business. The entire family worked in the store, filling many positions. The Stern Brothers themselves often greeted customers.

In 1879, the store was relocated to a larger building at 110 West 23rd. Street. The building was designed in Renaissance Revival style by architect Henry Fernbach. Fernbach was a Jewish German born immigrant that made his way to the United States in 1855. He was known for his designs of a number of prominent American Synagogues. However, the Stern Brothers quickly outgrew their new space and had the building enlarged according to a design by W.M. Schickel in 1892. Schickel’s addition tripled the dimensions of the original structure on the eastern portion of the site.

The store was noted for its cast-iron facade at 32-36 West 23rd Street and 23-35 West 22nd Street. The Stern Brothers Department Store was an elegant store noted for its fashionable clothing. Ladies from all over the city flocked to Stern Brothers for their Paris fashions. Doormen wearing top hats greeted customers as they entered the store.

The Stern Brothers flagship store moved uptown across from Bryant Park by Fifth Avenue and West 42nd Street in 1913. In 1914, Irving C. Stern, son of Louis Stern, married the daughter of Arthur D. Brandeis. Arthur was president of the J.H. Brandeis Company of Omaha, Nebraska, the biggest department store west of Chicago. Brandeis and the Sterns shortly afterwards joined businesses.

Store sales declined in the late 1950s and early 1960s as many white-collar workers were leaving the city for the suburbs. The Stern Brothers closed their New York location in 1969 to focus on their stores in New Jersey. The Stern Brothers remained in business for over 130 years. In 2001 the company was integrated into Macy's and Bloomingdale's. Today a Home Depot occupies the first floor of the old Stern Brothers Department Store at 32-36 West 23rd Street.

The enormous, six-story former Stern Brothers department store was designed in Renaissance Revival style. The 19th century addition tripled the dimensions of the original structure on the eastern side of the building. The Stern Brothers monogram is still inscribed above the central arch.