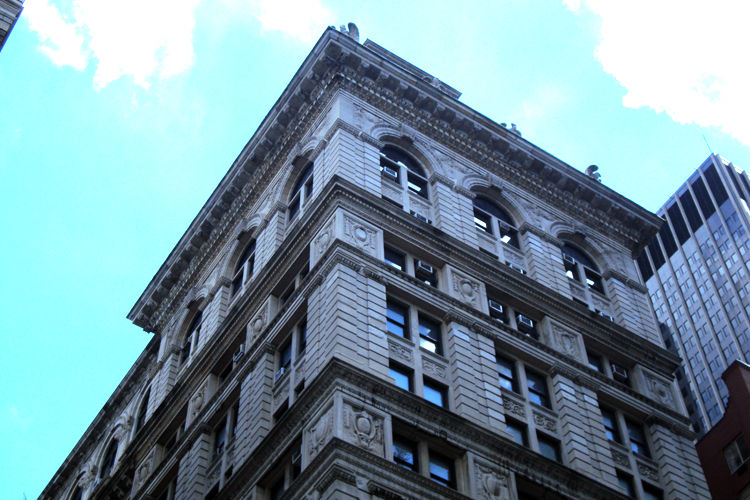 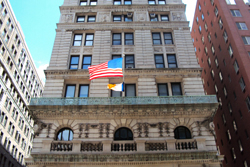 The original New York Life Insurance Company’s headquarters was built from 1868-1870 and had been located on what is now 346 Broadway. Architect Stephan Decatur Hatch designed an expansion of the original building in 1894. However, Hatch died before the work could be completed and the commission was taken over by prominent architecture firm McKim, Mead & White, whom also designed a replacement for the original structure, which included the tower clock. NY Life Insurance moved to Madison Square Park in 1928. In 1967, the building was acquired by the City of New York.

New York Life Insurance had built its headquarters between 1868-1870 on the Broadway end of what is now 346 Broadway. However, by 1894, the company had outgrown its office space and hired architect Stephan Decatur Hatch to extend the building eastward to Lafayette Street. Hatch had worked for several years for John B. Snook, one of the city’s top architects, and was also known for his design of the Gisley Hotel. Unfortunately, Hatch died before his design of the extension could be constructed. The architecture firm of McKim, Mead & White took over the commission and completed the extension. McKim, Mead and White was a prominent American architecture firm at the turn of the twentieth century and lays claim to some of New York’s most prominent buildings including the Metropolitan Club, Villard Houses, and the Manhattan Municipal Building. The company then decided to replace the original building as well. McKim, Mead & White designed a palazzo style pavilion crowned with a clock tower. The clock was manufactured and installed by the E. Howard Clock Company in 1897. The clock is powered purely by a 1,000-pound weight. The hammer that strikes the bell the on the hour is powered by two 800 pound weights. The bell weights 5,000 pounds and is twice the size of the Liberty Bell in Philadelphia. The new building, which is now bounded by Broadway, Leonard Street, Lafayette Street and Catherine Lane, was completed in 1898.

New York Life Insurance moved to Madison Square Park in 1928. Afterwards, various city agencies were renting office space in 346 Broadway as early as 1939. In 1967, The City of New York acquired the building and moved the Criminal Court, Summons Part there.

Unlike the New York City Hall clock and the Jefferson Market Courthouse clock, the New York Life Insurance Tower clock had never been electrified. However, prior to 1980, the clock had not worked since the 1950s and had not been lighted for nighttime viewing since the 1940s.

The clock was restored as a volunteer effort by Marvin Schneider and Eric Reiner. At the time, the men worked in the city's Human Resources Administration. They were both mechanical savvy, but had no experience with clocks. The men worked on their lunch breaks and days off for over a year to restore the clock. Today, the clock is still completely original, which is a rarity in New York City.

The Clock Tower Building was added to the National Register of Historic Places in 1982, and designated a New York City landmark in 1987.

The palazzo style office building located at 346 Broadway is crowned with a clock tower. Balustrade railing with a series of eagle sculptures perched on top surrounds the clock. The building towers thirteen stories high with ornate detailing on the eight and eleventh floors. There are six columns stretching three stories high at the entrance. On the fourth floor there are arched window bays with a balcony and balustrade railing.