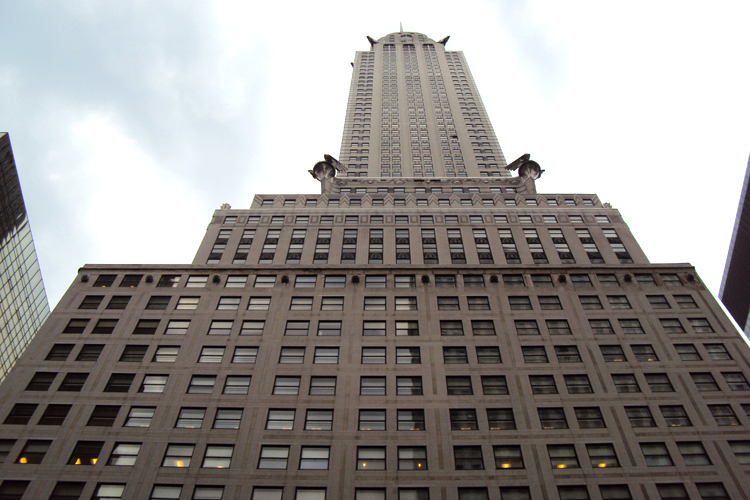 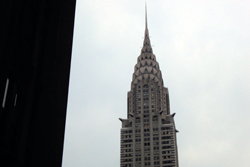 The Chrysler Building has famously appeared in film, photography, art, music, literature, advertising, and even video games. However, besides from being an ironic part of New York City’s skyline, the building also has a storied past. In 1929, there was a fierce rivalry to construct the world’s largest building. Walter Chrysler and architect Van Allen set their sights on 405 Lexington while George Ohrstrom and architect Craig Severance broke ground at 40 Wall Street. The Chrysler Building held the crown for less then 1 year when the Empire State Building replaced it.

The office building at 405 Lexington Avenue was started as a small speculative project before it was taken over by Walter Chrysler, founder of the Chrysler Corporation, who purchased the building’s design and lease while in construction and allegedly asked elite architect Van Alen to construct the highest building to date as a monument to his growing company. During this time there was an intense competition in New York to build the world’s tallest building. The original design of the building did not meet the approval of the initial builder William H. Reynolds, who felt the designed proved too costly. After the building was sold, Chrysler worked with Alen to redesign the skyscraper for additional stories, as well as the inclusion of various architectural details, such as the building’s gargoyles, modeled after Chrysler automobile products.

Construction proceeded on September 19th 1928. The Chrysler Building was erected at a frantic pace. On average, four floors were added per week. However, contrary to belief, no workers died during the construction. Over 400,000 rivets and approximately 3,826,000 bricks were used.

In April of 1929, while the building was still in construction, Chrysler was informed of a competing project at 40 Wall Street. George Ohrstrom, a 34-year-old banker, called "the kid" was vowing to build the world’s largest building at 40 Wall Street. Ohrstrom hired Van Alen’s former partner Craig Severance as his architect. Chrysler was quoted saying to his architect, “think up something”. The competition between the two buildings for the crown of the world’s tallest building was well publicized.

Construction on 40 Wall Street started in May of 1929. In August of that year, Severance heard rumors that Van Alen had modified his original design to exceed the official 808 feet that was planned. In response, Severance made his building’s pyramidal top steeper and added a 60-fott steel cap, which increased 40 Wall Street’s height to 925 feet. Construction on 40 Wall Street needed to be completed by May 1st for the start of the new building lease. Therefore, builder Paul Starrett was under substantial deadline pressure. To meet the May 1930 deadline, he had three shifts working seven days a week and set a speed record for completing a skyscraper. In November of 1929, while still in construction, Ohrstrom, Severance, and Starrett invited the downtown elite to a ceremony where they claimed the highest building prize. However, Chrysler and Van Alen had been secretly working to increase their buildings height, which was unknown to those who attended the ceremony.

Van Alen had in fact added an arch to the ornate steel dome, which brought the Chrysler Building’s height to 860 feet. A 27-ton steel tip was hidden at the construction site. The spire was delivered to the site in four different sections and secretly constructed inside the frame of the building. On October 23, 1929, a few weeks prior to the Wall Street ceremony, the spike, called the vertex, was hoisted to the top of the building adding an additional 186 feet to the height. In total, the Chrysler Building now stood 1,046 feet tall, 121 feet taller then 40 Wall Street making it the world’s tallest building. The buildings total height also surpassed the Eiffel Tower as the world’s tallest structure. The public was unaware until the story broke four days after the downtown ceremony.

The Chrysler Building was the headquarters of the Chrysler Corporation from 1930 until the mid 1950’s. Since then the building has had numerous owners. Interestingly, the Chrysler Corporation never owned the building. Walter P. Chrysler funded the project privately so that his children could inherent the building. It was purchased in 1957 by real estate investors Sol Goldman and Alex DiLorenzo. The building was later sold to the Massachusetts Mutual Life Insurance Company. Renovations were made to the façade in 1978, at which time the building was landmarked. The building was again sold in 1979 to Jack Kent Cooke, former owner of the Washington Redskins and Los Angeles Lakers, in 1979. Cooke had restorations completed on the spire in 1995. After Cooke’s death in 1997, his estate sold the building to Tishman Speyer Properties and the Travelers Insurance Group. In 2001, a 75% stake in ownership of the building was sold to the German investment group TMW. In 2008, the Abu Dhabi Investment Council acquired 90% ownership of the building. The Chrysler Building is currently the world’s largest brick building and the third tallest building in New York behind the Empire State Building and the Bank of America Tower. It stands exactly equal in height to the New York Times Building, which opened in 2007.

The Chrysler Building has continued to be a favorite among New Yorkers. An ironic part of New York City’s skyline, the building has a appeared countless times in film, photography, art, music, literature, advertising, and even video games. Furthermore, the building has been an inspiration for many skyscrapers built around the world.

The Chrysler Building is considered by many to be a masterpiece in Art Deco architecture. The building was constructed of masonry with a steel frame and metal cladding. There are 3,862 windows on its façade.

The silvery clad crown is arguably the Chrysler Building’s best-known feature. The Enduro KA-2 metal is an austenitic stainless steel developed by German steel company Krupp. It’s composed of seven radiating terraced arches. The stainless steel cladding used for the arches is ribbed in a radiating pattern. Triangle vaulted windows strength along the parameter of each arch.

There are two sets of lights that allow the crown to be lit up in a spectrum of colors on special occasions. The first set is inserted on the steel of the building itself and the second set is positioned on the mast arms and point back at the building.