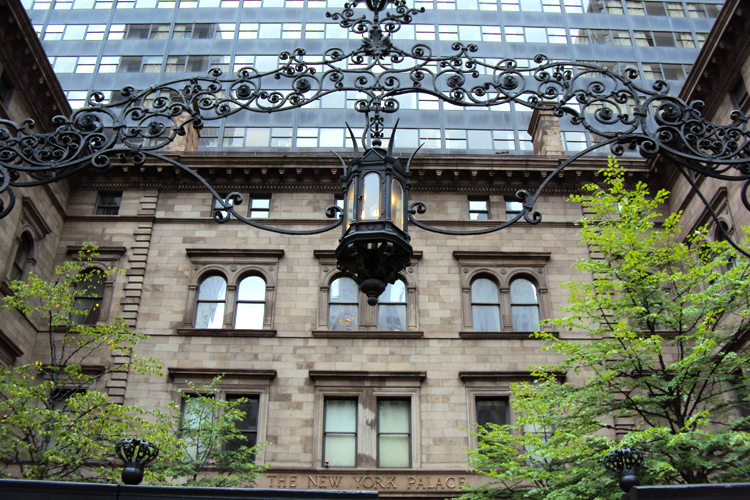 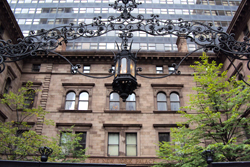 The Villard Houses were commissioned by and named for American journalist and financier Henry Villard shortly before his railroad empire began to crumble. The residences was one of the first buildings designed by architecture firm McKim, Mead and White, whom went on too become one of the most successful firms in New York City’s history. The building, modeled after the Cancelleria in Rome, was constructed in 1884. During the 1970’s, restoration of the residence and construction of the 51-story tower that sits directly behind the residences was completed by real estate developer Harry B. Helmsley.

The Villard Houses were named for Henry Villard. Villard was an American journalist and financier who was an early president of the Northern Pacific Railway. He commissioned the Villard Houses shortly before his railroad empire began to crumble.

The Villard Houses was designed by architecture firm McKim, Mead and White and constructed in 1884. Firm partner Charles White’s sister was married to Villard’s brother-in-law, which may have played a role in the firm’s selection for the project. The residences were one of the firm’s earliest commissions. McKim, Mead and White went on to become one of the most celebrated architecture firms in New York City’s history.

The townhouse complex had been modeled after the Cancelleria in Rome. As is common with Italian Renaissance architecture, the exterior of the residences reveals little about the grand interiors. The highly polished beige marble lobby has three levels, all of which are accessible from the grand staircase.

Over the years the buildings and interiors proved to be expensive to maintain. Most of the originally lavish interiors of the residence had been gutted and reused for various office purposes. However, the Villard House, at the south side of the courtyard, been well persevered.

The Villard Houses was designated a landmark by the New York City Landmarks Preservation Commission in 1968. Restoration of the residence along with construction of a 51-story New York Palace Hotel tower directly behind the original building was proposed by real estate developer Harry B. Helmsley. Helmsley’s companies property portfolio was one of the largest in the United States and included such notably buildings as the Empire State Building, The Helmsley Palace, and the Park Lane Hotel. He had originally wanted to demolish the Villard Houses for his new building; though, the Landmarks Preservation Commission fought to save the original structures.

The project was designed in partnership by architect firms Emery Roth & Sons and Hardy Holzman Pfeiffer in 1977 and completed in 1980. Emery Roth had built a reputation for designing many of the many of the definitive New York City hotels and apartment buildings of the 1920s and 30s. His sons took over and largely expanded the firm.

The wings of the building now house several of the city’s non-profit organizations including the Urban Center, the Landmarks Conservancy, and the Municipal Arts Society. The fashionable Upper East Side restaurant Le Cirque 2000 relocated into the public rooms of the Villard townhouse in the mid-1990s. At about the same time, the hotel created an elegant outdoor café in the courtyard.

The original building was restored in 2003. The building is frequently scene in the TV series Gossip Girl as the hotel where the van der Woodsen family lives.

The Villard Houses consist of five Renaissance Revival buildings are unified by a single facade that wraps around a U-shaped courtyard. The style is based on that of a 15th century Italian palazzo. The design of the hotel tower addition, which sits behind the residences, departs radically from the Villard Houses in terms of color, form, decoration and scale.